The late, great physicist and Nobel Laureate Richard Feyman once said, “I know what it means to know something.” By this, he meant that he understood the process through which one must go in order to know that something was true, and what standards are necessary in order to claim that one has found something to be true. In the same interview, Feyman spoke about pseudoscience and people having the chutzpah to write on topics as if they are definite truths, even though said topic had not been investigated. Such writings are prevalent in articles within not only the fitness industry, but also within exercise science and physical therapy, especially as they pertain to biomechanics. As I slowly make my way through graduate school, where my concentration is on biomechanics, my frustrations with these writings continue to increase and can no longer be ignored. Thus, I have decided to start writing (more) regularly in order to address common mistakes and misconceptions within the area of biomechanics. Ultimately, the purpose of my writing is to educate and inform readers about higher-level or often-misconstrued topics in biomechanics. I should mention, much of my writing assumes that the reader has a basic understanding of mechanical concepts; that is, from an introductory physics course.

It is not uncommon to hear that an exercise or movement loads a joint in a certain way; for example, a recent article claimed that the hip thrust places a lot of shear on the lumbar spine. While many may indeed understand the basics of forces – that is, whether a given external load will induce a shear or compressive force – what joints actually ‘feel’ during movement and exercise is not so intuitive. In fact, the forces that joints ‘feel’ during movement are so difficult to predict that biomechanics researchers have created an annual challenge to see who can accurately model them in the knee during gait.3 To truly calculate these forces, one must account for muscle forces, as I will explain herein.

In order to illustrate the difference, think of a knee extension machine in which the resistive force is always acting perpendicularly to the shin (Fig. 1). In a quasi-static model, in which the tibiae, fibulae, and feet are assumed to be massless, the net joint force at the knee is equal in magnitude and opposite in direction to the force being applied to the shin. In this case, the net joint force can be broken down into its orthogonal components, anterior shear with zero compression, meaning that a structure like the PCL will have to produce a shear net joint force directed anteriorly in order to prevent the tibiae, fibulae, and feet from accelerating posteriorly. When most people talk about joint forces, this is to what they are referring. However, this analysis blatantly ignores muscle forces. In this example, quadriceps will have to contract in order to produce a net joint moment – that is, a moment equal to and opposite that which is induced by the resistance load – and their contraction will also produce forces about the joint. Specifically, a quadriceps contraction will create compression and anterior shear, which will vary depending on the joint angle. This anterior shear will greatly and nonlinearly influence how the ACL and PCL experience loads, and will also result in much higher compressive forces.7 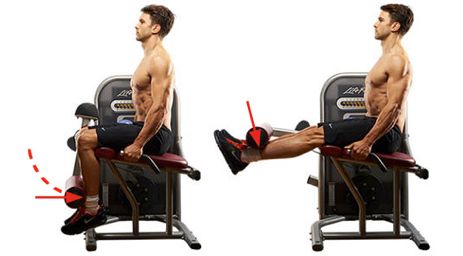 From the above example, it is clear that taking muscles into account when describing joint forces is essential if one is looking to describe which structures are being loaded. Of course, this is not easy, which is why musculoskeletal modeling is its own subfield of biomechanics. However, the difficulty of modeling should not preclude an individual from being intellectually honest about what he or she knows about how a movement loads structures in the body. In other words, due to the complex nature of musculoskeletal biomechanics, most individuals cannot accurately predict what structures are being loaded and how much load those structures are experiencing during a given movement or exercise. Oftentimes, computationally-heavy modeling techniques are needed to answer these questions. Thus, I ask that people be wary when reading about what structures may experience ‘dangerous’ (or any) levels of loading in a given movement, unless a) a model with justified assumptions was created to answer that question or b) loads were directly measured. In other words, it is important to ask yourself whether or not the author (or yourself) has done the work necessary to answer the question of interest; if not, the claims may very well be unjustified.

The sarcomere is the fundamental force-generating unit of muscle. It follows a predictable length-tension relationship, and this is fairly well-understood by many who study muscle, train individuals, and rehabilitate patients. If I were to ask a personal trainer, physical therapist, or exercise science student, I am sure (hopeful?) that they